The interaction of wind and cloud is one aspect of EUREC4A that some of us are interested in (EUREC4A-Wind), and we hope to generate some momentum in a broader community that helps us to better measure, model and understand interactions with wind.

In this entry I want to introduce a view of Earth that focuses specifically on winds, created by kitesurfers and jet pilots who are interested in wind and wave forecasts. Windy.com gives you an instantaneous view of how the winds are blowing, here over the tropical Atlantic. They have done a great job at including a number of forecast models, including ECMWF at a 9 km resolution and ICON at 7 km resolution (EU only). By showing animated particles on top of contour maps of any field (for instance, pressure, or for those who really cannot let go, of clouds), the focus remains on how and where the winds are blowing. 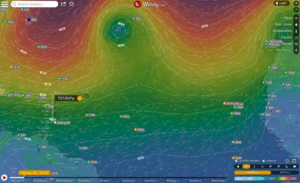 Today's Windy and MODIS maps below for instance show how much clouds near Barbados are influenced by higher latitudes. A low pressure system in the middle of the northern Atlantic gives way to more northeasterly winds near Barbados, bringing airmasses that originate from far more north than usual. I still need to learn much about large-scale dynamics, but it seems clear that the trailing front and convergence zone with very weak winds over the central Atlantic play a strong role in setting cloudy and clear sky regions there.

Zooming in, we can see that Barbados today was quite a windy and gusty place, with mean winds near or above 10 m/s, with maxima up to 17 m/s. (In comparison, the year-round mean wind speed is about 7 m/s). There was plenty of convection, clouds and rain, and if you look at the weather/radar quicklook of the site, also below, notice how variable the winds were! I like to think that the spikes correlate with the passage of convective events, but what causes what? 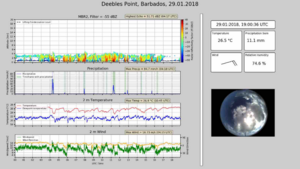 Already during RICO, we found that one of best predictors of daily rainfall is the daily mean near-surface wind speed, and one explanation we explored was a thermodynamic one: stronger winds lead to stronger surface fluxes. But Raphaela analyzed lots of cold pool passages at the site, and the cold pools have a signature in the winds as strong as that in temperature. In the last figure below taken from her thesis she shows the composite structure of cold pool passages at the BCO site and at Ragged Point. See the blue lines for the strongest cold pools, with the strongest increases in wind speed! (As a side note, notice that perhaps more striking than any moist rings at the cold pool edge is the dryness within the cold pool - hence, cold pools are really dry pools. The dryness hints that convective downdrafts are important, so that besides the spreading cold dense air, surface-fluxes, convergence lines, we should also think of convective momentum transport ...the interaction of clouds and winds is intricate!) 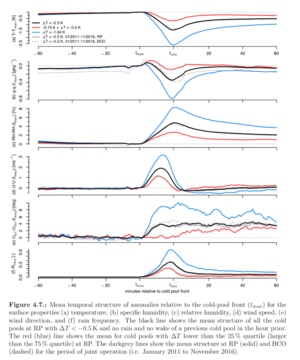 Finally, take one more look at Windy.com and look at the wind forecast of the upcoming week. Winds should slowly calm down to perhaps 5-7 m/s by Friday or Saturday morning. So let me return to you on Friday and discuss what this wind change meant in terms of clouds and rain (or the other way around!)