PreEURECA 2017 officially ended yesterday but I got a bit waylaid and am a few posts behind. So maybe I find my way to one or two more posts before March comes around, just so we send off PreEUREC4A with a proper farewell. To help us along the way the BCO crew put together some new quick looks of different sensors including the wind-lidar plots, ala Aude (our famous, among glider pilots at least, intern from last year) where clouds are overlain. 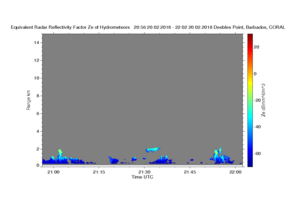 The wind plots (A1) show the very nice structure of turbulence in the marine boundary layer, and the juxtaposition with clouds. In particularly like the period between 20 and 23 UTC, where there is a well-defined shallow cloud layer. This can be put in context by the radar data (A2), also the zoom in the middle of the period. Overall we don’t see many strong downdrafts, at least not without precipitation, and then it is hard to tell how much is precipitation and how much is downdraft. But certainly for the non-precipitating clouds one clearly sees how they top updrafts that extend through the entirety of the boundary layer.

What you can see at other times, I would claim, is how the boundary layer turbulence (coherent up and downdrafts) does not always extend through the full region where we get lidar returns for instance between 0100 and 0130 the boundary layer eddies (A1) seem to reach to about 750 m, although the lidar measures already up to 1 km. To a lesser extent this is true at other time, but nonetheless it is fascinating that in some place there seems to be updrafts that penetrate much deeper than the sub cloud layer, for instance at 9:15. Also interesting is how the lidar detects the upward motion in the clouds, presuming that they are weak enough not to be precipitating. 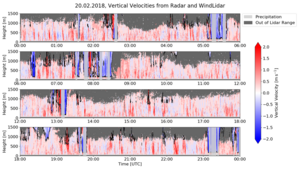 Hold on for one or two more posts before the end of the month, just so we can send PreEUREC4A out in style!