One of my interests in EUREC4A is the influence of mesoscale gravity waves and/or stratified turbulence on convection. Much attention has been focused on convectively coupled waves, such as the prominent spectrum of equatorially trapped Kelvin waves, but less so on higher frequency fluctuations that are not strongly coupled to convection but may nevertheless affect it.

My interests go back to the late 1960s when for 3 years, my family lived in Florida. Rocket launches from Cape Canaveral were a subject of endless fascination, and when those launches occurred just before sunrise or shortly after sunset, the contrails were beautifully illuminated by the sun. Unlike jet contrails, rocket contrails are nearly vertical and can last for more than an hour. If you hang around to watch, the initially straight contrails gradually deform into a somewhat regular pattern of sine waves, as seen in this photo (lifted from the web) (ed.'s note: not published).

The scale is too long and the evolution too slow to plausibly be owing to instabilities of the contrail itself or the plume of air in which it is embedded. Are we seeing evidence of internal waves? Stratified turbulence?

Back in the 1980s, when observations from aircraft and specialized balloons became abundant, a controversy arose as to whether the observed mesoscale power spectrum, with a well-defined k^-5/3 slope (where k is a horizontal wavenumber), is dominated by quasi-two-dimensional stratified turbulence, as Doug Lilly had proposed in 1983, or instead represented a nearly saturated spectrum of internal waves, as found in the ocean. To my knowledge (which is admittedly out-of-date), this controversy has not been entirely resolved, and it should be noted that the two hypotheses are by no means mutually exclusive. Also, it is not clear to me whether the regular pattern of sine waves seen in the photo is primarily in the stratosphere or whether they are also present in the troposphere. If so, can they affect convection and other weather systems?

As a first stab at this problem, I looked at sequences of 12-hourly radiosonde measurements from islands in the tropical Pacific. I was mostly interested in short-term fluctuations in hurricane potential intensity (PI), and on time scales of a month or less these are dominated by atmospheric temperature fluctuations rather than SST changes. At each of the stations I looked at, there is an obvious diurnal cycle in PI, which for the present purpose I remove simply by averaging together the 00 and 12 GMT soundings. A time series of PI at Pohnpei for the month of October, 2017 is shown below. 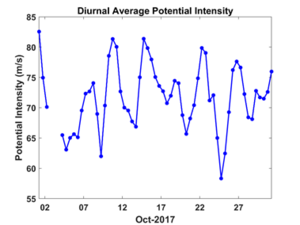 There is a strong signal at around 3-5 days….surprisingly strong, in fact, with PI varying from about 58 to about 83 m/s. One interesting issue is whether this variability is retained or filtered out in operational initializations of NWP models; if it is filtered out, we might be missing an important source of TC intensity variability.

Of more general interest is the character of atmospheric virtual temperature variability. To illustrate this, I first define a quantity I call the Buoyancy Equivalent Potential Temperature, which is the equivalent potential temperature just saturated air would have to have at a particular reference level (here chosen to be 940 hPa) so that when lifted by a reversible adiabatic process, it has the same density temperature as the sample in question. I like this quantity, because on average it does not vary with altitude in the tropical atmosphere. The time-height series of diurnally averaged theta_B for Ponpei in October, 2017 is shown here: 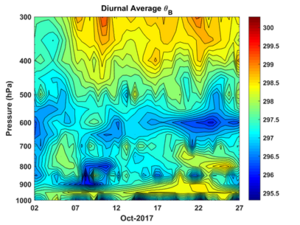 The radiosonde instrumental noise in temperature is around 0.5 K, so some of what we are seeing here is noise, but on the other hand there are structures that seem coherent across a number of radiosondes.

Are we seeing the effects of internal waves? Stratified turbulence? Both? Or something else entirely? Any way one looks at this, these are fairly large fluctuations by the standards of tropical variability. One would expect them to affect moist convection, and we would perhaps also look to convection as a cause of this variability.

I hope to use EUREC4A observations to better quantify this type of variability in the tropical atmosphere, to try to identify the sources of these fluctuations, and to find out whether and how they affect convection.