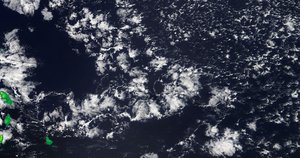 This Worldview image epitomizes the thought that big clouds come with big holes … funny to think that the reason a certain place is not cloudy is because another place is cloudy; or does it work the other way around. There is a conservation principle lingering in those ideas.  People living over eastern boundary current regions may well object to this line of argument, maybe a visit to Joshua tree would give some perspective.

But what I really wanted to share with you was something I saw when looking at GOES East:

You should be able to play that directly, but if you have problems with the format here is a link to an animated gif version:

What caught my eye was what seemed to be an alien sailing across the middle of the image, but I expanded the time window and could trace it back to a a larger scale feature, but the integrity and speed with which it transects the domain was rather remarkable for me.   Well the movie also gives life to the patterns we have been exploring, and makes me wonder if we will get to see some of the gravel that is upstream of  Barbados.   But after watching it long enough I convinced myself that the upper level moisture field, with which this flying cloud was associated, was imprinting itself on the cloud field below.  That would be through radiation.  Does anyone agree?