One major goal of EUREC4A is to understand how the cloud amount in the trade-wind layer varies with convective mixing and the large-scale circulation. This is motivated by the discrepancy in the warming response of cloud-base cloud amount in climate models vs. large-eddy simulation and observations. Cloud-base cloudiness in climate models is much more sensitive to changes in environmental conditions than in LES, which has been attributed to model diversity in the strength of convective mixing and its coupling to surface fluxes and cloud radiative effects. During EUREC4A, we will set out to collect the measurements necessary to constrain this coupling observationally.

To measure the strength of convective mixing, we developed a method to estimate the shallow-convective mass flux from the sub-cloud layer mass budget*. We tested this method with the ICON-LEM simulations during NARVAL1 in December 2013** and find the estimated mass flux to reproduce both the magnitude and the diurnal and day-to-day variability of the mass flux diagnosed directly from the simulated cloud-core area fraction and vertical velocity (see Figure 1). 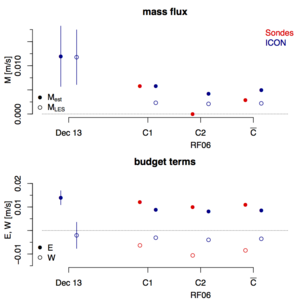 Figure 1 also shows estimates of the mass flux estimated from dropsonde data of the first set of circles flown during RF06 of NARVAL2. The agreement between the observed and simulated mass budget estimates Mest, and their correspondence with the diagnosed mass flux MLES is very encouraging! The mass budget estimates successfully reproduce the very low mass fluxes of C1&C2 compared to the 4-day mean of NARVAL1. A closer look at the contributions of the two budget terms, the entrainment E and the large-scale vertical velocity W, shows that both terms are slightly larger for the observations. The plot also highlights that the contribution of W can be as large as E, so it’s great that we can measure the subsidence so well with the dropsonde circles!

Tomorrow, Marcus will show you another way to measure the convective mass flux with observations. Together, the two methods will provide a robust estimate of the mass flux that will help understand the coupling between convection and the large-scale environment.

* A brief note on the estimation procedure: We define the sub-cloud layer top h as the level of neutral buoyancy of a surface-lifted parcel plus a fixed overshoot of 15%. The entrainment rate at h is calculated using the zero-order flux-jump relationship, with the entrainment buoyancy flux computed as a fixed fraction (0.2) of the surface buoyancy flux. I show here the equilibrium mass flux estimated without accounting for temporal fluctuations in h, so Mest= E+W, where W is the large-scale vertical velocity at h.

** Many thanks to Matthias Brueck & Daniel Klocke for performing the simulations!