Pre-EUREC4A is a bit beyond its half way point. Sandrine pointed out that today we have a march of flowers headed our way. You can see this in the attached Aqua image from this afternoon 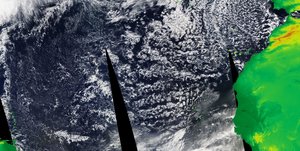 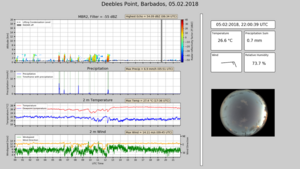 If you look (very) closely this transition picture is disrupted by another band with lots of cloud-coverage associated with a north-south oriented band of clouds just west of the windward islands, behind (west of) Barbados. The Aqua image is from about 1700 UTC, and so you can see how this band passed over the island in the radar imagery, wherein a band of deeper clouds pulsed over the island between 6 and 13 UTC. We had a drop in power at the site today, but still from the Raman water vapor profiles (A3) you see nicely the drying out of the cloud layer, as with the band of clouds we had a moist layer extending to 4 km. This moist layer is quite evident in the sounding from 12Z. But as we transitioned into the drier, less cloudy situation, the boundary layer substantially shallowed/dried, beginning with the passage of the last deeper cloud near 13Z.

But the real question will be how the flowers will evolve as they move downwind. Any bets?

** I noticed that sometimes the order of my attachments seems to not follow the order in which I name them, this seems to be a mac mail thing, but hopefully you can figure out what I mean by the context.