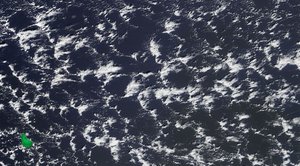 Day 25 and we finally got hit by a load of gravel .. at least that is what we called this granulated cold pool structure that shows up so nicely in the MODIS imagery (A1) over Barbados today. These are expressed by bands of clouds, with tops getting near the triple point level, but all staying warm. A sequence of cloud is shown from the radar in terms of their reflectivity in A2. 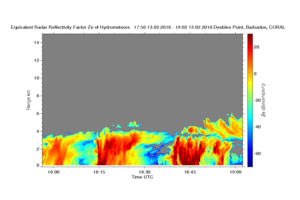 One thing I found interesting in the radar data was the doppler width (A3).** It has odd speckling (high broadening colored red) within the reflectivity bands, regions with very broad spectra. Look at the diagonal line extending upward to the right at about 8:15 in A3. This could be due to a number of things. But one way to get broad doppler spectra is to have new updrafts with lots of water and small drops moving upward be convolved with rain falling from earlier convection, moving downward. But maybe it is something else entirely. Or maybe associated with strong mixing at cloud top, with the diagonal being a band of convection. Any suggestions?

Well and as a final gesture, of something that just looks nice, check out the sunrise this morning (A4) 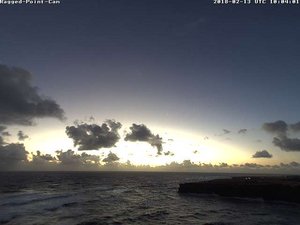 **For those who don’t think much about radars, the doppler from the radar is measured as a doppler spectrum, i.e., an FFT is performed on a sequence of returns in each range gate. This gives how much reflectivity is associated with what phase velocity. Normally the reflectivity is then the integral over the doppler spectrum, but you can also measure other statistics from this, like the width of the doppler spectrum. If the drops were all moving together, like in ballet then they have a narrow doppler spectrum, but if some are moving at one speed, say small drops carried by the updraft and large drops falling through it, then we would see two peaks, and because droplet spectra are not mono-disperse this would then spread out into a broader spectra, with more doppler width, i.e., the brighter colors on the radar image.