Greetings from Barbados! Friedel and I have been at Barbados Cloud Observatory (BCO) for one week, enjoying the flair at the site, the ocean, and the clouds. All instruments have been running successfully during pre-EUREC4A this year, but the disdrometer cable gave up a couple of days ago: it was completely rusted. Friedel has been working hard on designing a new plug for it, and, since yesterday afternoon, it's back on track. Curious how BCO looks like these days? Take a look at this video Friedel put together: https://owncloud.gwdg.de/index.php/s/DXtvlk8s5qa9JrH

I'm a phD student with Uli Löhnert at Uni Köln, and I'm interested in the moisture structure in the trades. Operational ground-based MWR retrievals often lack the vertical resolution needed to resolve the strong inversion, whereas the lidar with its high vertical resolution profiles can't see through clouds. To overcome these observational limitations, I work on synergistic water vapor profiling methods using passive and active remote sensing observations in order to increase the information content of water vapor profiling retrievals in cloudy conditions.

Specifically, I combine the brightness temperatures of the passive microwave radiometer with the differential reflectivity signal (Dual-Wavelength Ratio, DWR = Z_94 - Z_35) of the two radars installed at BCO: the Ka-band radar CORAL operating at 35.5 GHz, and the new W-Band radar RuMBa at 94GHz. Due to the difference of the water vapor continuum absorption in these two radar frequencies, the differential signal DWR is proportional to the integrated water vapor along the beam path (see Figure 1: DWR (Ka-W) is proportional to partial IWV up to cloud base, plot based on forward-simulated airport soundings). The passive microwave radiometer MWR gives very good estimates of the integrated quantities IWV and LWP, whereas the active radar instruments can add information about the vertical distribution of the water vapor. The atmosphere in the microwave frequencies is semi-transparent; thus the instruments can get information from within and above clouds, too, which offers high potential especially for a use in cloudy conditions. 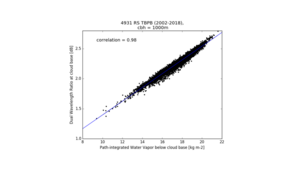 The new retrieval method relies on an optimal estimation approach and has been tested on synthetic observations which result from forward-modeled radiosonde ascents from Grantley Adams airport. We retrieve the vertical absolute humidity profile and the LWP. Adding the radar observations leads to an increase in information content compared to the only-MWR retrieval results by 11% (3.54 vs 3.15 degrees of freedom, average value for 200 observations simulated from sondes Jan-Apr 2018). Using the differential radar observations in combination with the 2m humidity can also help to quantify the partial integrated water vapor below cloud base without lacking information due to overlap areas. The retrieval is now ready to be applied to observations from BCO, and thanks to the sondes we will launch during pre-EUREC4A this year, there will be (hopefully) lots of cases to evaluate the retrieval.

While working on the soundings from Grantley Adams airport, I have been puzzled by the linear decreasing absolute humidity profiles below Lifting Condensation Level (LCL). Shouldn't this be approximately constant in a well-mixed maritime  boundary layer? Do we observe land or airport impacts here, or are there issues with the soundings? Do we observe the same at BCO? Therefore, we've been launching sondes in the last couple of days at the same time as the sondes from the airport at 8am/pm local time. 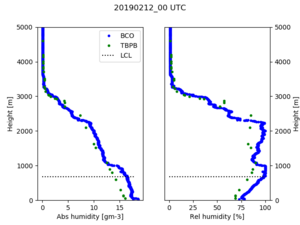 Figure 2 shows the 00UTC sounding from yesterday evening (8pm local time) with a shallow cloud between 700m and 1000m, and an overlaying cloud at around 2000m (relative humidity very close to 100%) - we can see the same cloud features in the Wband radar image 10 minutes prior to the launch at around 23:50UTC, just after a quick shower (Figure 3). 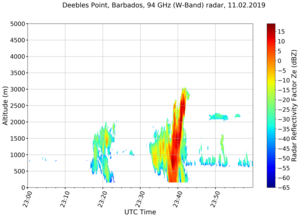 The airport sonde did not fly through the same cloud feature but seems to catch the inversion height similarly at around 2300m. The data has a coarser vertical resolution and thus (probably) misses some fine-scale features we can observe with the Vaisala RS41. The gradient below LCL seems smaller at the BCO-sonde compare to the airport sonde - island impact?

On pre-EUREC4A day 13, Stephanie Fiedler wrote about her adventures on the MS Maria S. Merian cruise in December 2018. On Dec. 14th, the ship was located east of Barbados with a sonde launched at 23 UTC. Comparing the ship sonde to the airport sounding one hour later (Figure 4), 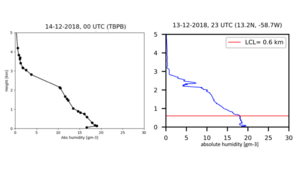 atmosphere below LCL, and the profile looks more as expected. The sonde drifts about 1.5 km horizontally until it reaches 700m height: during this time, it still is located over the island.

During EUREC4A next year, there will lots of similar cases to analyze - it will be interesting to see how the observed moisture structure changes from the ships compared to the ground-based observations at BCO, and how the remote sensing instruments at the site cover the variabilities. Maybe we'll also be lucky and observe more cases like shown in photo 2....

PS: Bottom Bay does not look like on a postcard at the moment....see photo 1.

PPS: The subject line is the title of a song by Typically Tropical.