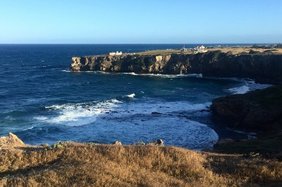 Dust: Sounds boring, right? You’re probably thinking about vacuum cleaners or something equally dull (sorry vacuum cleaner fans). But the airborne mineral dust we’re observing during EUREC4A has been on an incredible journey thousands of kilometres across the world.

A group of scientists from the University of Manchester has been based at Ragged Point as part of the multinational EUREC4A project. Ragged Point is on Barbados’ east coast, a stone’s throw from the East Point Lighthouse and close to the Barbados Cloud Observatory (BCO). Looking out from the headland, you’ll feel a consistent easterly breeze in your face coming off the Atlantic Ocean, and you’ll see nothing but water in the distance. If you were to head east from here, you wouldn’t hit landfall again until Africa. It’s an ideal location to study long range transport of air into the Caribbean. And Ragged Point has a long history of atmospheric observations which dates back decades thanks to the pioneering work of Prof Joe Prospero at the University of Miami. This work continues today – Haley Royer and Prof Cassandra Gaston from U of Miami have been sampling intensively during EUREC4A. 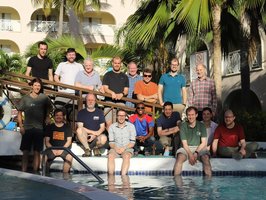 The Manchester team (Michael Flynn, Nick Marsden and Peter Gallimore, supported by Prof Hugh Coe back in the UK) are making observations of aerosols – tiny airborne particles a few nanometers up to tens of microns in size. For scale, a human hair is about 100 microns thick. Despite their diminutive dimensions, these particles have global scale impacts on the atmosphere, including on cloud formation and climate – hence our motivation to study them during EUREC4A.

We have assembled a mobile laboratory (shipping container doesn’t sound as glamourous) at the site, including a 10 metre observation platform which is used to sample air away from our activities on the ground. 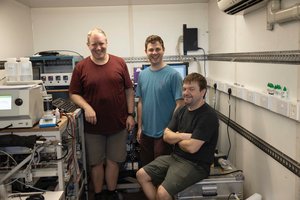 Inside the container (sorry, laboratory) are a number of state of the art instruments for measuring particle number, size and chemical composition – parameters which are key determinants of atmospheric aerosol properties, and provide clues as to their sources. A subset of these measurements, including a condensation particle counter (CPC) and collection of aerosols onto filters, are also included in the British Antartic Survey’s Twin Otter aircraft, which has been flying past Ragged Point and the BCO regularly during the campaign. This will allow us to make strong links between aerosol properties on the ground and aircraft observations made in the sub-cloud and cloud layers. This container has travelled to many locations around the world and will journey back to the UK afterwards, complete with a little more sea spray! 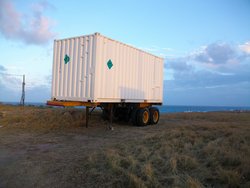 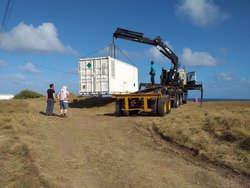 For this campaign, we are most excited to look at results from two mass spectrometers (MS) which tell us about aerosol chemical composition and mixing state. Particularly useful in these conditions is a LAAPTOF (Laser Ablation Aerosol Particle Time of Flight MS, phew!). This uses a laser to vapourise single particles and a time-of-flight mass spectrometer to detect the resulting positive and negative ions. The mass spectral patterns are characteristic of different particle types, and detection of individual particles containing multiple components (such as mineral dust, sea salt and sulfate) tells us that these particles have an interesting history, perhaps as a result of in-cloud processing. 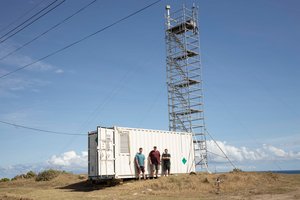 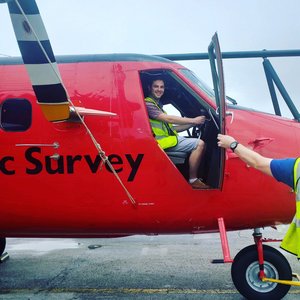 What have we seen so far? For the first days of the campaign, we could literally see for miles along the coast – we were sampling pristine air containing just a smattering of sea spray particles. But at the end of January, a Saharan dust event arrived on the island, which produced a notable haze and some vivid sunsets. It also made for more interesting measurements – from a quick look, we were detecting plenty of dust particles with the LAAPTOF! We have also seen the presence of organic material, perhaps related to biomass burning smoke or emissions from the sargassum seaweed so prevalent in the surrounding ocean. After the campaign, we hope to use the mass spectrometry observations to assess the types of dust present, and whether other components such as biological materials are hitching a lift long distances over the ocean. 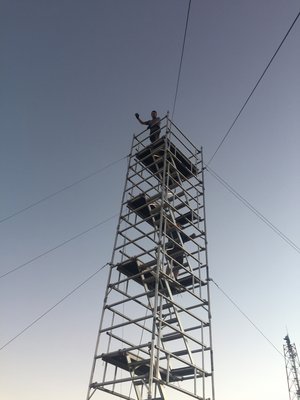 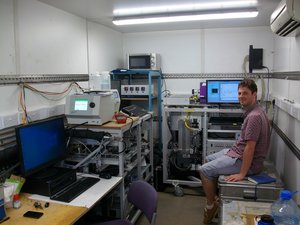 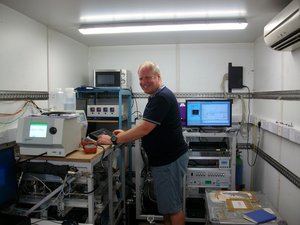 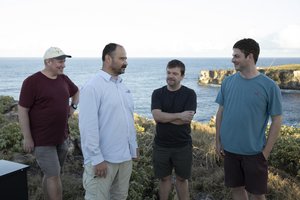 In a changing climate, understanding long range transport in the atmosphere and in-cloud processing of particles is more important than ever. Long term observations in Barbados suggest that the seasonality and intensity of dust events on the island may be changing – wintertime events such as the one we are experiencing now are historically rare. Dust events can be a major determinant of local air quality, as well as having significant implications for weather more widely. For instance, mixed particles containing dust and sea salt can act as cloud condensation nuclei (CCN), which impacts warm rain production and radiation (sunlight) transfer. Mixtures of biological material and dust can seed ice crystals in clouds very effectively too. We hope that our study as part of EUREC4A will provide a better understanding of these phenomena.