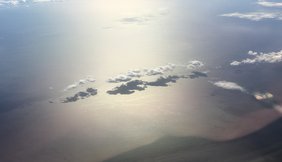 What will happen to the cloud shadows as the climate changes? People may care because hot days become a bit more pleasant when clouds block the sun for a few minutes. Cloud shadows may indeed become more welcome when high temperatures in the summer are (on average) a couple of degrees warmer than at present. However, this question is also very important for the climate, and --- in particular --- clouds like those over the ocean over Barbados provide shadows that could make the climate warm more or less depending on whether those shadows dwindle or grow with the warming climate.

The surface of the ocean is dark, and while it does reflect some sunlight, only about seven percent of sunlight that hits the ocean's surface is reflected back towards space. The rest of that sunlight heats the upper layers of the ocean. Clouds are bright and reflect much of the sunlight that hits them from above. In the above photo, note how dark the ocean surface is in the shadow of the clouds. The shadows of those clouds provide the underlying ocean a respite from the heat of the sun, just as they do for people on a hot summer day. While these low clouds do provide a cooling effect on both the ocean and the climate system, the shadows of clouds higher up in the atmosphere have more complicated impacts, with warming due to their greenhouse effect working against the cooling due to their reflection of incoming sunlight.

While climate change is forced mainly by increasing greenhouse gas concentrations, the climate system itself is modified by the warming. As your body may perspire more on a hot day, the atmosphere also responds to warming. For example, the amount of water vapor is larger in warmer air if the relative humidity remains approximately fixed as temperatures increase. Water vapor is a greenhouse gas, so that this increase in water vapor with warming would add to the greenhouse effect and induce more warming than might have happened with no change in water vapor amount. In other words, water vapor provides a positive feedback if changes in relative humidity are small in comparison to the increase in humidity with temperature (about 6% per degree Celsius of warming if the relative humidity does not change). Other processes --- the reflection of sunlight by ice and snow, changes in the vertical structure of temperature (the lapse rate) --- also provide feedbacks (positive and negative, respectively) on the climate, and global climate models show reasonable agreement in their prediction of these feedbacks.

The climate feedbacks associated with clouds are a longstanding source of disagreement between climate models, and clouds in regions like those upstream of Barbados (that cover much of the world's expanse of subtropical oceans) were shown to play a large role in this disagreement by Sandrine Bony and Jean Louis Dufresne of the Laboratory Meteorology Dynamique in Paris. With Bjorn Stevens, Sandrine is one of the instigators and organizers of EUREC4A, and one of the goals of EUREC4A is to improve our understanding of these clouds so that we can better predict their change with climate. 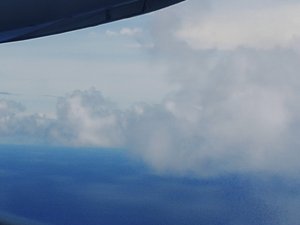 As shown in the work of Jessica Vial and her collaborators, climate models suggest a decrease in those cloud shadows and therefore a positive feedback from clouds like those upstream of Barbados, but the size of that feedback varies strongly across models.  Their disagreement lies mainly in the impacts of climate warming on the amount of cloud near cloud base.  Cloud base marks the bottoms of clouds that are formed by plumes rising up from near the ocean surface.  Near Barbados, cloud base usually sits between 600 and 800 meters above the ocean surface.  Changes in the cloud fraction near cloud base in climate models seem to be related to changes in the ways cumulus clouds mix the moist air within the cloud with the drier air around and above them.  As these cumulus clouds are much smaller than a grid cell in a climate model (about 50-100 kilometers in the horizontal with much higher resolution in the vertical), cloud and mixing processes are predicted based on the statistical properties across the grid cell.  This is a difficult task, and prediction of clouds and mixing in these regions are uncertain, leading to this disagreement among models depending on their treatment of these "sub-grid" processes. 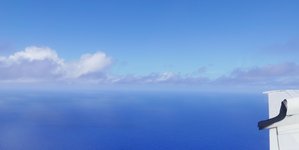 Interestingly, when Louise Nuijens and her collaborators analyzed the way that clouds above Barbados varied over days, weeks and months, they found that the amount of cloud near cloud base varied less than cloud higher in the marine boundary layer.  This suggests that --- on these timescales --- these variations in clouds higher in the marine boundary layer are more important than near cloud base.  The interesting question is whether the same is true on climate timescales.  Researchers will explore these questions both by exploring the observations during EUREC4A as well as simulations of clouds in current and perturbed climates.

High-resolution models, sometimes called "large eddy simulations", can resolve the larger scales of motions within a single cloud and are thought to provide a more solid representation of these mixing processes because the sub-grid scales of these models are smaller than many of the clouds near Barbados.  Because of their high resolution, they have been used mainly in relatively small domain (about 10 kilometers square in many cases), for short durations (hours, days or weeks rather than the centuries simulated in climate models) and often in idealized or average condition (instead of the day-to-day variations in weather that real clouds experience).  Within these limitations, large eddy simulations have been used to explore cloud feedbacks in cumulus clouds like those upstream of Barbados.  These experiments generally suggest that there will be a modest decrease in cloud shadows in places like Barbados, with different predictions that likely result in part from the design of different idealized experiments.  One recent study, by Ping-Ping Narenpitak and Chris Bretherton of the University of Washington, actually suggests an increase with warming of cloud shadows associated with shallow cumulus clouds that do not rain.

While both high resolution models and climate models generally predict a decrease in cloud shadows (or a positive feedback) over oceans like those around Barbados, they differ in the way this happens.  High resolution models predict weak changes in the fraction of cloud near cloud base and stronger changes above, while climate models predict the opposite.  While high resolution models are probably more robust in their representation of a single case, they can only represent a tiny fraction of the conditions experienced in a climate model during its centuries of simulations.  Does the increased variability of conditions in a climate model explain the difference?  Does the difficulty of representing kilometer-scale cumulus clouds in a climate model with hundred kilometer grid cells explain it?  EUREC4A hopes to address these questions by making extensive observations of the fraction of clouds near cloud base and of the behavior of these cumulus clouds that form and dissipate as the trade winds carry them towards Barbados.

This blog post has summarized many studies without making any citations.  Interested readers are directed towards the articles below (mostly recent review articles) for more detail and scientific rigor.