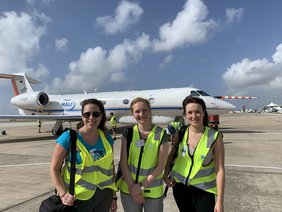 On Friday January 31, I had the opportunity to fly on HALO, the German Gulfstream-V. This was my first flight on HALO, and only my 3rd research flight ever! It was an active day for EUREC4A/ATOMIC, with 4 aircraft in the air (HALO, the French ATR-42, the UK Twin Otter, and the US NOAA WP-3D). My day started with an arrival at the airport an hour and a half ahead of our scheduled take-off time of 11:00 AM. After receiving my access badge and donning a stylish yellow high-visibility vest, the three of us who were HALO newbies were given a tour of the plane and received the practical component of the safety briefing.

The time leading up to take-off is busy, with the instrument teams getting their instruments up and running and calibrated and everyone reviewing the plan for the day and getting set up. HALO was parked on the apron near the WP-3D, so I took advantage of the opportunity to snap a photo of the planes side by side (with the fuel truck in the middle).

After the pre-flight briefing, we boarded the plane and prepared for take off. We watched the ATR-42 take off five minutes ahead of us, and then we were off! As is typical for EUREC4A, we flew a series of circles at 32,000 feet over the course of the 9 hour flight. My task was to take meteorological observations (aka, watch the clouds outside the window) and help with the dropsondes. The dropsondes are an important part of EUREC4A, as they allow us to characterize the large-scale environment and calculate quantities like large-scale vertical motion. Data from HALO’s dropsondes also helps the ATR-42 determine at what level to fly to capture cloud base. We launched 12 sondes in each circle, spaced 30 degrees apart. This means we launced a sonde every 5 minutes – pretty busy! I learned how to initialize the dropsondes, including setting the frequency used to track each sonde, and how to launch them. We were able to watch the data come in real time, and after the sonde successfully reached the surface, send the data off to be automatically processed and assimilated into weather forecast models. In total we launched 74 sondes, but 4 of them lost communication after a short distance. 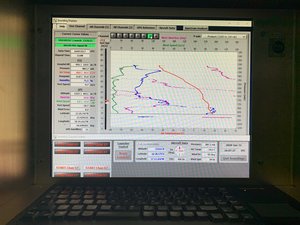 Part of the strategy of EUREC4A is to fly the same circles every flight, rather than target specific phenomenon. For our flight, our circle happened to be centered around a stratiform cluster of shallow clouds. 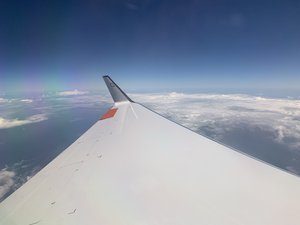 As the cluster was in the center of the circle, we flew often over tiny popcorn shallow cumulus (“sugar”) that were very low (about 500m) in otherwise clear skies, a few regions of stratified cloud with cumulus bubbling through, and lots of dust and haze. The south/southeast side of the circle was by far the dustiest. 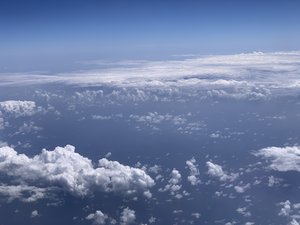 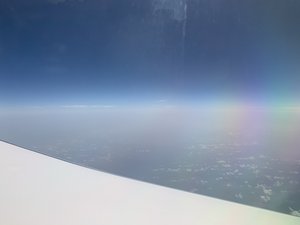 HALO has a LIDAR through which we could see the shallow dust layer at 2-2.5 km and trade cumuli below it at 500 m. 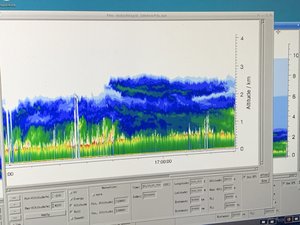 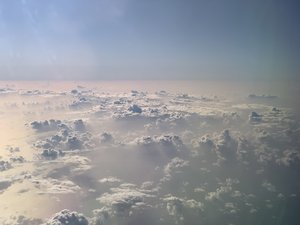 After competing 3.5 circles, we made an excursion out East to the R/V Ron Brown and waved to it (we could see it as a tiny speck 32,000 ft below us), and passed by the WP-3D, which was doing its own maneuvers near the Ron Brown. After a circle around the ship for radar calibration, we headed back and completed 3.5 more circles. By our second set of circles, the stratiform cluster had eroded, but the west side of the circle was now under the influence of a weak large-scale trough draped from southwest to northeast. The radar finally had something to measure, as we flew over patches of thicker cumulus that were precipitating. 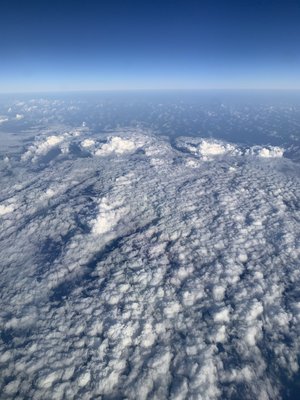 Then, we were treated to a beautiful sunset! 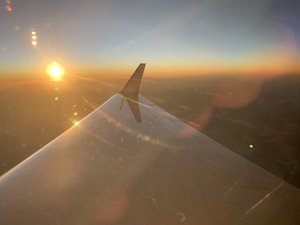 Overall it was a great experience, and between launching sondes, keeping a close eye on the clouds, talking to the other scientists about what their instruments were showing, and coordinating with the other aircraft and our team on the ground, the 9 hours went very quickly. The last 2 hours of the flight were in the dark, where we relied on the radar and lidar to inform us about the cloud structures. After landing back in Barbados, we had a de-brief where we discussed what happened on the flight, and then headed home for dinner & bed. It was a long day, but I’m so grateful that I had the chance to fly on HALO!