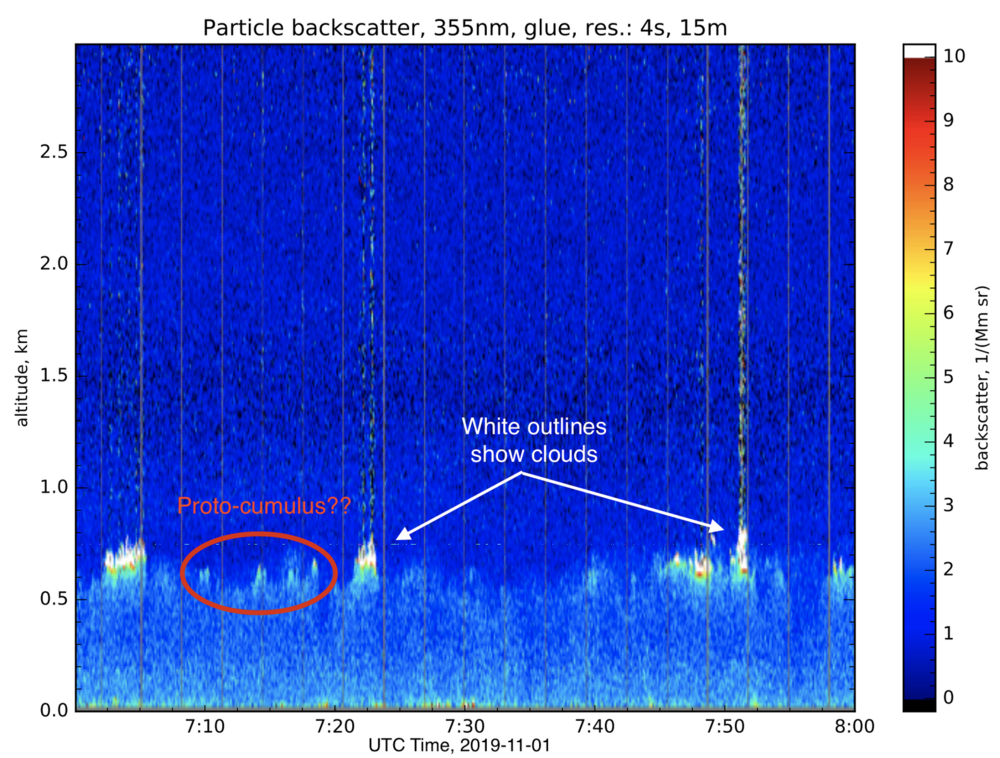 In many cases, clear (non-cloudy) air that subsequently forms a cloud is moister and more buoyant than its surroundings. It rises and cools until the water vapor condenses on small particles in the air called aerosols. Because the air close to the surface is stirred by heating from below, these rising plumes tend to have similar properties and form clouds at roughly the same level, which we call the "cloud base". When visiting with Ilya Serikov at the BCO's CORAL lidar, he pointed out some patches of non-cloudy air just below the cloud base where there was increased scattering of the laser light sent upward by the lidar, as if these patches of air had more and/or larger aerosol particles than the surrounding air. I speculated that these might be "proto-clouds" where the rising relative humidity might cause the aerosols to swell as they took up more water and to scatter more light. Muggy summer days and damp winter ones sometimes have reduced visibility, or haziness, for the same reason. When I mentioned this to Kerry Emanuel, he suggested the name "proto-cumulus", which I like better because it also communicates the process by which the cloud is forming.

The same way that a cloud is often preceded by a patch of moist air, a cloud will (often) be followed by a moist patch of air after the cloud droplets evaporate. Kerry Emanuel calls this a "cloud ghost". These moist patches can be important for subsequent convection, because the rising clouds entrain the air around them. When that air is dry, some cloud water will evaporate and cool the cloud, causing it to be less buoyant and rise less quickly. When a rising cumulus cloud encouters a cloud ghost (a moist layer remaining from past convection), that cumulus cloud may become more vigorous than those around it which rise into less hospitable conditions. This could be important in deep, thunderstorm clouds, where initial cloud plumes help pave the way for deep, strong updrafts of the kind that can produce lightning. However, it can also be important in the clouds around Barbados, where the remnant of a previous day's convection might provide a good environment for the growth of clouds on the following day.

What I say here is speculation and not meant as a request for "proto-cumulus" to be added to the WMO Cloud Atlas (https://cloudatlas.wmo.int/home.html). It's meant as an illustration of how the visit to EUREC4A has made this scientist who models clouds on a computer in rather idealized situations think more about the real lifecycles (and multiple lifecycles) of those clouds.

Others have undoubtedly had similar thoughts, which may indeed lie in the scientific literature.

The above figure is taken from the CORAL lidar quicklook here: