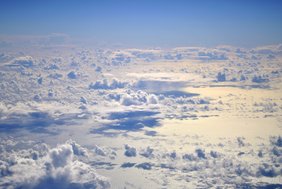 This week, a group of around 80 ambitious senior scientists and PhD students from various institutes from all over the world met in a small conference room, in the Marie and Pierre Currie University in Paris. Their individual passion about climate, clouds, ocean, and atmosphere unites them to investigate how sensitive the Earth’s climate is to changes in the Tropics.

Breaking down this complex question leads to many specific issues: Which factors control the cloudiness caused by trade wind cumulus clouds?; What are the feedback mechanisms, which couple ocean, clouds, and the atmosphere?; How to improve the current operational climate models to better the tropics in long term forecasts?; In which way and how strong does the ocean surface and the ocean currents determine the lowermost atmosphere, the so called boundary layer? These questions are only a fraction of the aspects, which will be addressed and tried to be answered during EUREC4A.

Now you might ask yourself: How do I personally benefit from these insights? The accuracy of weather forecasts, made available to you on television, by smartphone apps, and on the internet, as well as global climate predictions rely on the precise knowledge and simulations of the entire Earth’s atmosphere. Almost every region on the planet is interconnected with each other in some why and, hence, influences the global distribution of high and low pressure systems and, as a result, the weather in your hometown. Furthermore, the prediction of future climate and the consequences of changing climate conditions will concern everybody – earlier or later.

Therefore, results and experiences from the EUREC4A campaign will, mostly indirectly, have effects on your everyday life. Additionally, today’s research is, to a major part, funded and supported by the public, which means: by you! The same holds for EUREC4A and, hence, the results will be available for everyone: through publishing data and scientific outcome, but also through this more accessible and comprehensive blog.

So we, the contributors of the Paris meeting, jointly decided "Let's do it!" and agreed to launch this blog. Here, contributors of EUREC4A will write personal statements about their everyday experiences onboard the aircrafts, the research vessels, and the ground-based stations during the campaign. In an additional section, nice impressions will be shown in the "Image of the day" area, where every day a new picture will be presented and briefly described.

Hopefully, you will enjoy following the stories, experiences, and images in this blog. The whole EUREC4A team is very excited and is looking forward to a fascinating campaign with a lot of new insights about the Earth’s climate!