Notwithstanding the fact that cloud fraction is a pretty crazy idea — measuring the fraction of a dispersion seems oxymoronic — trying to make sense of this question can lead to some interesting puzzles.  One that we have been struggling with is what to make of the apparently large discrepancy between idealized LES of trade-wind clouds, which tend to have have at most a few percent of the air at any level which is saturated, where as observations suggest this is much larger. 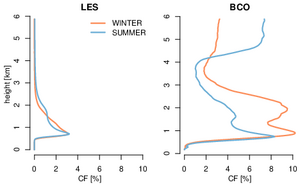 Raphaela Vogel who did her PhD at the MPI (primarily with Louise) and is bound for Paris raised this question as part of her PhD where she made an earlier version of the figure attached as A1. The figure shows echo fraction from radar and compares it with `cloud fraction’ from LES. The discrepancy is around  a factor of three, i.e., large. It seems too large to blame on issues of definition, but who knows. It could also be that in nature there is lots more cloud debris associated with a greater deal of variability than in idealized LES… but it raises the question as to whether we are looking at the right clouds, or the right cloud controlling factors, when we look through the lens of LES.

The larger echo fractions don’t seem implausible given the satellite imagery (A2), but then again LES animations don’t look that different either.  An ENS masters student, Octave Tessiot, will visit us in the spring and look a bit more in depth at this issue, so maybe we will soon get somewhere on this… but for now it remains a bit a puzzle, and makes me wonder, whether for all the lure of LES, if it is missing something fundamental.